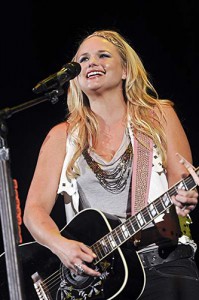 Miranda Lambert took the stage with her pink guitars to a packed house in Dayton on Saturday night on her CMT Revolution Tour with her latest single “Only Prettier.” She continued to entertain the audience with her contagious energy through 20 more hits throughout the evening. Don’t let her pretty smile fool you because the songs got more soulful as she sang ballads like “The House that Built Me” and “Dead Flowers” She got the crowd on their feet when she sang her gritty song about justice called “Gunpowder and Lead” and at the end of the song she held up her microphone stand shaped like a shotgun.

Miranda told the audience about growing up in East Texas and discovering a love for Bacardi and tattoos. The self-proclaimed redneck who loves beer, deer hunting and country fried steak has her roots firmly planted in country music and her raspy vocals set her apart from the other ladies of the moment in Nashville.

She speaks with a sparkle in her eye about her long-time relationship with fellow country singer Blake Shelton who she is now engaged to before she sang a song she co-wrote with Blake and members of Lady Antebellum called “Love Song.”

We can all look forward to November 10 when Miranda will surely shine on her birthday at the CMA Awards where she is nominated for nine awards. We can expect that she will surely take one home to celebrate her 27th birthday and her tenth year in country music. 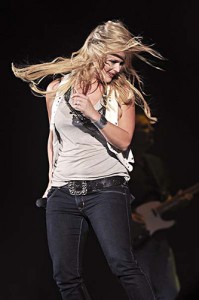 Eric Church got the crowd warmed up with songs that only be described as “true” country music. His multi-tiered stage allowed the five guitars on stage to be showcased in a rock-n-roll vibe. Church speaks about his love of boots, Skoal, Nascar, his mama and all things country in his hit “I Love You the Most” and had people raise their boots in the air during the song “These Boots.”  I have seen Eric several times over the past few years and this was by far his most high energy polished performance with a stage set to showcase his talented band. 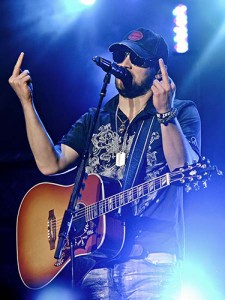 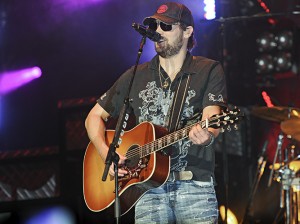 Josh Kelley opened the show with his strong vocals and heart-felt music as he starts his journey into country music. I was shocked to see his name on the show list because Kelley has been on the pop and adult contemporary charts with songs like “Amazing” for many years.

We caught up with Josh on Friday before the show to discuss his crossover into country music and how his wife (Katherine Heigl) and new daughter have influenced his latest music.

Amy: I was a little curious about why you made the switch to country music after having a successful pop career.

Josh: Well there are a couple different reasons. When I was 21 I actually moved to Nashville to try to get a record deal and I was turned down. Obviously in this business you have to make money and I got an opportunity to make an adult contemporary album which is where I recorded “Amazing” and I have basically been doing music ever since. Two  years ago after I wrote a song called “Gone Like That” I got a few offers in Nashville to sign a country deal. Honestly it has been one of the best things to happen to me because it has all been building up to this over the years. I have been honing my craft and learning how to be a better writer, singer and performer. It is really the perfect time. I have always been a country fan growing up in Augusta, Georgia. I helped my Dad raise cattle in the north Georgia mountains. It has always been in my blood I guess.

Amy: I know you write and co-write all of your songs. Can you talk to me about your writing process?

Josh: When I am by myself I try to come up with cool guitar riffs or hooks and then I write the song by myself. A lot of the time I really enjoy writing with other people. I have about ten different friends that I like to write with. We just sit down and play each other our ideas and a lot of the ideas meld into a song. It is actually kind of random, but it is a lot of fun. I love my job for sure.

Amy: Is there anyone in Nashville that you would like to write with that you haven’t worked with yet?

Amy: I was researching and found an old interview when you were in Cincinnati and played at a place called Top Cats in 2004.

Amy: Is there anything that you like to do that is special when you are in Cincinnati?

Josh: The last time I was in Cincinnati I think we played across the street from a bowling alley so I think we bowled. I have played a few golf courses in Cincinnati and done some fishing. We always just kind of randomly do whatever we can find.

Amy: I know you have a new daughter and you are out touring with Miranda Lambert for awhile. Does your family ever come out on the road with you?

Josh: Yes we are on this tour until December 11 and yes they do. I have a bed in the back of the bus. I finally upgraded and now my wife will actually come out with me on the tour. About half the time we bring Naleigh and the other half we don’t so we can have some alone time.

Amy: I really can’t see your wife (Actress Katherine Heigl) sleeping in one of those coffin structures on the bus.

Josh:  She has before but she will definitely prefer this.

Amy: You guys have been talking about moving to Nashville.

Josh: I lived in Nashville before I married Katie. I lived in Franklin and that is where I bought my first house. It is actually the house where Lady Antebellum got their start. (Josh’s brother Charles is part of the country trio Lady Antebellum)  When we got married I moved to LA and now we actually live in Utah and we love it there.

Amy: Are you planning to move back to Nashville.

Josh: Yes but we are going to take it slow and try to find the right kind of place for us.

Amy: Your new single is out “Georgia Clay.” When can we expect the new album?

Josh: The new album is probably going to be out right before Valentine’s Day and the video for “Georgia Clay” will be out next week. The video is really cool and I can’t wait for everyone to see it.

Amy: Where did you shoot the video?

Josh: We shot it outside Nashville in a place called Adams, TN out in the middle of nowhere. The video has an amazing vibe and I think people will love it.

Amy: The only thing from Adams is the Bell Witch.

Josh: Yes the Bell Witch. She is in the video somewhere.

Amy: Your brother is in Lady Antebellum and I know he co-wrote some of the tracks on the album. Is there any chance you guys will tour together in the future?

Josh: Yeah maybe in the future. You know we write together all the time. They have a song on hold for their next record that we wrote together. We’ve written together since we were 11 years old so it’s very comfortable for us to work together.

Amy: You have played acoustic a lot on the past. Are we going to hear anything acoustic tomorrow night? 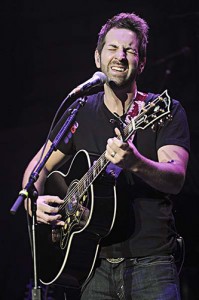 Josh: You won’t hear anything solo acoustic, but you will hear a song that is basically acoustic called Naleigh Moon that I wrote about my daughter about the first time I held her. You know we adopted her and we got her when she was 9 months old from South Korea. She is amazing and has definitely made me and my wife better people. That will be the second or third song we sing.

Amy: I know that you have talked about how much you love your wife and your new daughter in the new album. How has it changed you?

Josh: You know you just become a little more selfless. There is a certain level of self-absorbed that you have to be to be an entertainer or you never make it, but what happened here is that you start living for a child. In turn being a writer and an artist, you tend to start writing about it as it is happening instead of what you hope can happen one day.

Josh: Please tell people that my wife’s movie is coming out today “Life As We Know It.” Everyone go see it.

Amy: I actually just went to the grocery store today and noticed that you are in every country magazine and she is on the cover of several other magazines like In Style. You guys are everywhere.

Josh: When we were in NYC recently, Charles and Lady Antebellum played one night, I played the next night and my wife’s movie premiere was the next night. It was total New York family takeover and so cool. We are all enjoying it.

Josh did sing Naleigh’s Song and it is evident as he sings that his life and songs are full of joy and love for his new family.