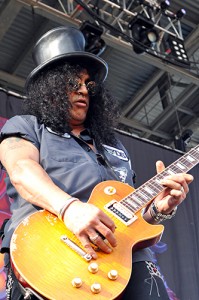 (August 23, 2010)—Never one to slow down, Slash is gearing up to give fans another exciting run.  After wrapping up a whirlwind tour of Europe the Slash will close out the summer on a high note with the release of SLASH Deluxe Edition, available for pre-orders NOW and on sale September 28, 2010 at http://fanwall.slashonline.com.
From studio to stage, fans will get a true glimpse at what it took to achieve one of the most anticipated albums of 2010.  Beautifully packaged with artwork by Ralph Steadman, SLASH Deluxe Edition, includes 3 discs worth of audio and video content along with an updated 12 panel booklet, limited edition guitar pick and redeemable interactive fan poster.  Comprised of everything from the earliest demos conceptualizing his album all the way through to live video footage from the album release secret show at the famed Roxy, this Deluxe Edition features new content any fan would want to experience.

I have the original version of the album and it is amazing to hear Slash team up with some of the biggest names in music. The album features an all-star roster of guest musicians including Ian Astbury, Chris Cornell, Rocco DeLuca, Fergie, Dave Grohl, Myles Kennedy, Kid Rock, Lemmy Kilmister, Adam Levine of Maroon 5, Duff McKagan, M. Shadows of Avenged Sevenfold, Ozzy Osbourne, Iggy Pop, and Andrew Stockdale of Wolfmother.

You know I will own anything with Kid Rock singing, but I also was able to see and shoot Slash performing live at Rock on the Range with Myles Kennedy. His performance was one of the highlights of the entire festival. 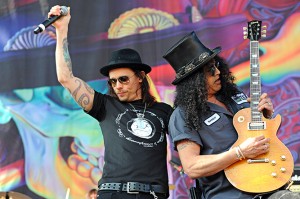 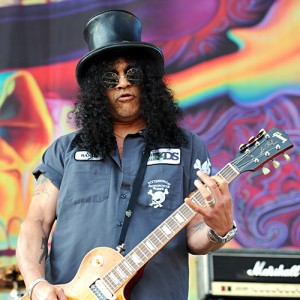