Buckcherry is a hard rock band from Los Angeles, California, formed in 1995. Their fifth album, All Night Long, was released on August 3, 2010.

We caught up with lead singer Josh Todd before the show to talk about the new album and the X-Fest weekend in Indy.

Amy: You just had the fifth record come out.

Josh: It just came out August 3, “All Night Long” is the title of it.

Amy: What was the process like to make the album?

Josh: It was actually a lot of fun. We got to make the record at our guitar player’s house, Keith. He co-produced it with Marti Frederiksen. It was the first time we really got to kind of relax and not be so under the gun with budgets and everything.  We got to go at our own pace and I think it is reflected in the song writing and overall body of the work.

Amy: Do you typically write together or do one of you take the lead?

Josh: We all have our little departments and we work together. I write most of the lyrics and Keith writes most of the music. Stevie and Jimmy also contribute musically and then we put it all together as a band.

Amy: I have always wanted to ask, what the story is the behind “Crazy Bitch?”

Amy: You have played with tons of legendary rock-n-roll musicians like Slash and Motley Crue as well as many more. Is there anyone on your list that you would like to work with? 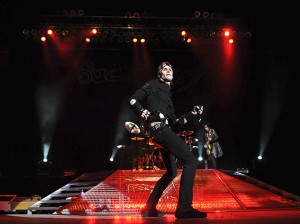 Josh: I think it would be different if you asked anyone in the band, but I would love to collaborate with someone like Prince or Stevie Wonder. Someone of that status would be amazing. Anything with AC/DC would be fun as well.

Amy: I have seen you on some TV episodes recently. You have been doing acting. What has that experience been like? How is it different than music? Do you see yourself doing it more in the future?

Josh: Yeah, I have done a few movies and TV episodes lately. I really enjoy it. It is a different experience and creative process. I have been doing music for as long as I can remember and to be able to do something to shift gears it is always good. Anytime I have some downtime, I try to get something started. The last scene I did was on a series called “Bones” and it was a lot of fun. I would like to do more in the future.

Amy: What do you do in your downtime?

Josh: I spend time with my family. I have a wife and 3 kids at home. I just enjoy spending time with them at home.

Amy: Do they ever come out on the road with you?

Josh: Occasionally, but it is actually more cost effective for me to go home. I go home every 10 days.

Amy: You guys have been touring non-stop for many many years. Is it hard to make it work? What is your secret?

Josh: It is challenging but I’ve been doing it so long and it is just the way it is. I don’t really know anything different. I am always on planes and working on schedules to get home and stay connected. It is difficult, but the way to get through it out here is to have an on and off switch.

Josh: Yes, I do a lot of video chatting which is great.

Amy: You guys are going to be around Cincinnati this weekend in Indy, do you have any favorite things to do?

Josh: We’ve played there so many times and it is always a great rock show. We take the same approach with every show. We give it 110% so I think it is gonna be a sweaty mess. 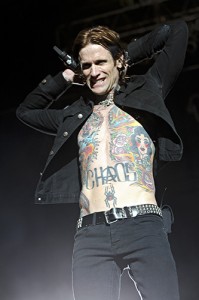