The annual X-fest rolled through Indianapolis and Dayton this weekend with a line-up including Papa Roach, Buckcherry, Sublime with Rome, Shinedown and many more. The annual festival is sponsored by local rock stations and draws tens of thousands of fans to the two shows from the tri-state region.

This year the weather was beautiful and the bands did not disappoint. Dust storms formed in mosh pits as fans enjoyed the show.

Leading up to the show we sat down with Jacoby Shaddix, the lead singer from Papa Roach, to discuss the festival, their new record, and how to keep a marriage strong. This is one time when I wish all the readers could hear the recording of the interview as it took place at 100 mph. Jacoby is always entertaining to talk to and again he did not disappoint.

Jacoby: Hi what’s up? I’m driving around town with a new girl and your like, fuck you, what’s up?

Amy: Hi, I didn’t expect to get serenaded!

Jacoby: Have you heard it?

(He asked me to hold on while he turns up the music playing in background so I can hear the song.)

Jacoby: It’s called “Fuck You.” (Over the weekend I actually heard the song on the radio and the title has now been changed to “Forget You” for radio play. I have to admit it is a catchy tune.)

Amy: Well thanks for taking the time to talk to me.

Jacoby: Let’s talk, let’s do this!

Amy: I am in Cincinnati with a paper called City Beat. You are coming to the area for the X-Fest this weekend in Indianapolis and Dayton.

Jacoby: Okay cool, yeah we’re coming around your way and we are going to rip some shit up. 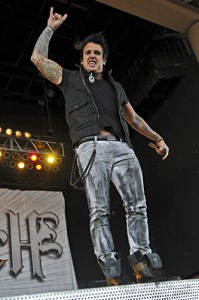 Amy: You guys have a new album, right?

Jacoby: Yeah. “Time For Annihilation.” It’s in stores now. Part of it is a live record and there are five brand new songs on it. So it’s kind of like an EP and a live album all on one cd conveniently priced at $7.99. We know people are hurting for cash and we just went to an independent rock label, so we are able to control the price of our albums better.

Amy: You guys moved from Eleven Seven right? How is that going?

Jacoby: It’s great being with a company that is focused primarily on rock music and that has been real cool for us so far. Only time will tell, but this is our first swing at releasing  a record with an independent record company. This is it.

Amy: Well good, hopefully the promotion will be there and they will focus on you guys.

Jacoby: Yeah it has been good so far.

Amy: So what is your favorite track off of the new album?

Jacoby: Either “Burn” or “One Track Mind.”

Amy: Are we going to hear the new stuff this weekend?

Jacoby: Yeah we are definitely going to play a few new songs. That is our goal for us going out on these shows. We’re like, “We have to play these new jams.” I mean, I love playing the old stuff, but we have this new record that sounds great.

Amy: I know you write. You are the only original member of the band. Can you talk to me a little about what your writing process is?

Jacoby: Pretty much it starts with our bass player. He writes a lot of the music, I write the melodies and the lyrics, and so it is a collaboration all the time. Tobin will come up with an idea and we might have a whole song written without vocals or anything and I will just take that and write vocals and melodies for it. Sometimes it is just an idea and we will just get in the room and start jamming in our studio and then it will turn into something completely different. Sometimes I will record a melody onto my iPhone on the voice memos and send it to my bass player and say, “Check it out. I have a melody, let’s do something.” So its many different ways that Papa Roach style happens.

Amy: Well two of my favorite songs you guys sing are the older songs. “Hollywood Whore” and “Scars.” I just wanted to know, what is kind of the story behind one or both of them?

Jacoby: “Hollywood Whore”  is just about the hollow shallow culture of Hollywood and how it is just stuff that gets into people’s mouths and fucks up girl’s perceptions of themselves because they don’t weigh 94 pounds and are skinny as fuck and don’t have all the money in the world so they think they are less. That is my rebellion against that culture because that culture allows people to look to them as role models, but I don’t necessarily see that some of those people should be role models. Not saying that I myself should, but it just doesn’t seem like there is much soul there. Just shallow.

Amy: That makes sense. You have children right?

Amy: Do they ever go out on the road with you or come to the shows?

Amy: I hope so. You have been married a long time too.

Jacoby: When I come home we just have crazy ill amazing sex and we actually care about each other and love each other. I have my partner in crime, my P.I.C. for life, you know? Straight up.

Amy: Well she has been there the whole time right from the beginning?

Jacoby: Yep, from the beginning. When I was a janitor, she loved me when I was broke.

Amy: That helps I think.

Jacoby: She will still love me if I quit and become a janitor again.

Amy: That’s good. That’s important and rare. I do a lot of interviews and I think that is rare to find.

Jacoby: Plus good sex too. If your sex life sucks, your relationship sucks.

Amy: Good advice for the kids.

Jacoby: It’s true. I mean, you have to satisfy each other, in more ways then one.

Amy: So you have had quite a few band line-up changes over the years. How does that affect the band and how do you guys adapt when the changes have occurred?

Jacoby: Pretty much we have been the same for like 10 years and then we got a new drummer. I mean if people went back into the history of the band, there were a couple people we jammed with like the first month back when we were 16 years old. I don’t really count that as line up changes. But the one major line up change we ever went through was our drummer. That was tough, but we got this guy Tony that came in and, he fits our personality and our style, and he is definitely a P Roach. He is a member straight up. We have so much in common and we get along so well out on the road and it is really enjoyable.

Amy: How did you find him?

Jacoby: He played drums for this band called Unwritten Law and we toured together and we made friends with each other out on the road. They were off the road and we needed someone to come replace our drummer a few years ago, just for like a month because he had to step away from the road and take care of some business. It was fun again, and that is what it’s about. It’s supposed to be fun.

Amy: Yes I would think so. So we are coming upon football season, are you a football fan?

Jacoby: (He yells: “Titties and beers.”) I like the San Francisco 49ers. I like to go to live sporting events. I think that shit is fun.

Jacoby: For the past 9 months he has just been saying, “Daddy, I want your Ipod touch.” He loves to grab my phone and play games.  He loves music and so I got him an I pod Touch. I will get a little scully case and I will load it up with music and games and he will be rocking out just like his Dad.

Amy: So what is your guilty pleasure?

Jacoby: My guilty pleasure, sometimes I like to check out Lindsey Lohan online and I sometimes rub one out to her pictures.

Amy: Did you see the new Maxim with her on the cover?

Jacoby: No, I haven’t but for some reason I just love the sexy freckles.

Amy: You should get the new Maxim. (I delivered the Maxim to him backstage on Saturday. Everyone should get a copy. It is the best she has ever looked.)

Jacoby: I mean I’m trying to convince my wife to see if we could have a little three way with her.

Amy: I mean she may be available, who knows.

Amy: I am a photographer so I will see you guys on Saturday. You guys are difficult to photograph. I am sure you have been told that.

Amy: Can you please stop moving your head for like 10 seconds?

Jacoby: Here is what I will do. I will make an agreement right now with you.

Jacoby: It is going to be the third song in, second verse, I am going to stand center stage for a whole verse, and if you don’t get a good shot, then fuck I don’t know what to do.

Jacoby: That’s right. Just throw a rock at me and I will remember.

Amy: Deal. (And as you can see from the picture, he came through on his promise.)

Amy: You also have a lot of tattoos, any there any that are more meaningful?

Jacoby: I have a pirate ship on my left forearm that is new. I got the pirate ship and my wife has the anchor.

Amy: Ah, that’s so cool. I know you guys have the stars, right?

Jacoby: Yeah, we are both into tattoos. We have a lot of tattoos that go together.

Amy: That is so cool. Did you get them together?

Jacoby: The star pieces yes, but not the ship and the anchor.

Amy: Who is your favorite tattoo artist? Where do you usually go?

Jacoby: Kyle Malone in Minnesota at Leviticus Tattoos. You can go on Papa Roach Facebook and we have him as a friend up there. You can check him out.

Amy: Well what are you most excited about at X Fest?

Jacoby: Oh dude, to fucking demolish. To breathe life into the rock crowd, to give the rock audience what they need, you know?

Amy: Well cool. Anything else we are forgetting to ask you?

Jacoby: I think that is pretty much it. You best get your ass to the rock and roll show and pick up that new Papa Roach record because that shit rocks.