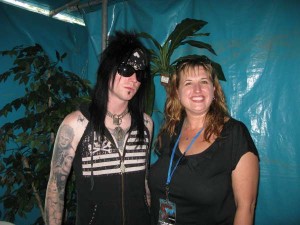 Murderdolls was formed during 2002 in Hollywood, California. The band line-up consists of core members Wednesday 13 and Joey Jordison (Slipknot/Rob Zombie.)

To date the band has released one album titled Beyond the Valley of the Murderdolls which was released in 2002. Their second album, Women and Children Last, will be released this summer 2010.

We sat down with Wednesday 13 backstage at Mayhem to discuss the band re-uniting and a tour that will kickoff this fall.

Wednesday: First album in eight years, first we did our first two shows in six years in California I guess about a month ago. Yeah man it’s great. Me and Joey, we got back together and decided to do a real Murderdolls record this time of original material and this record is just really well thought out as opposed to the first one. We love that record and everything about it but it was just really thrown together and we wanted to make sure this time that we made a real record with real songs and just original material this time.

Amy: So I know you sing, you play guitar, you play bass.

Wednesday: I dance. I start fires.

Amy: Are there any weird instruments you play or want to play that we don’t know about?

Wednesday: Harmonica. I dabble on the piano. I can do that brrrrrring thing. No, I mean I can play a little bit of everything, which was what was cool in the studio because between Joey and I, we can play everything. That’s a good thing to have, so we are like a two-man army.

Amy: You can just put it all together right, all the pieces?

Wednesday: And that’s what we did for the record too, so, yep.

Amy: Are you guys practicing while you’re out here on the road?

Amy: Are you coming out tonight during any of the performances, are we gonna see you?

Wednesday: No, I get the boring job of this tour. I get to watch everyone else rock out and I get to talk about myself all day, which it’s great because it’s promo for the record and I love doin it, it’s just kinda bum sometimes when you’re on the side of the stage watching and you think “Man, I wish I was playing tonight.” It’s just this whole press tour and by the time we’re done, we will have done press for almost ten weeks from Paris to Alabama to set our record up, there’s no better way to do that.

Amy: Plus it’s your friends, right, you’re hanging out with?

Amy: I just have some personal questions, you don’t have to answer.  I know you’re from North Carolina, right, you live in North Carolina?

Wednesday: I don’t anymore, but I’m from there.

Amy: And I’m from Tennessee, a fairly conservative place to grow up.

Amy: An issues with your parents being supportive? I know you’ve been doing music for a long time.

Amy: They know what you do.

Wednesday: They’re super proud of me and they’re super supportive. My family is great I had a great childhood and everything, but I guess just being in the Bible Belt and things like that and being around those kind of people you know, and I love those, those are my people.

Amy: You have huge fans there, but it’s still different

Wednesday: Yeah, but at the same time, growing up I got picked on as a kid and you know your typical stuff in school and things like that so I think that’s part of the reason why I turned out like this.

Amy: That’s not so bad

Wednesday: It’s a good thing. That town pretty much created me, you know.

Amy: You can send a shout-out, thanks man

Wednesday: Yeah, so thank you guys for knocking me down the stairs in the seventh grade, you made me want to become a rock star.

Amy: And you have a daughter, right?

Wednesday: I do have a daughter, yes.

Amy: And how old is she now?

Ryan: Does she listen to Murderdolls music?

Amy: Do you ever take her out on the road with you? You’ve toured solo too, right?

Wednesday: Yeah, she’s never seen me play live either. We go through North Carolina on this tour so I’m hoping I can just get her to come out to see the show. She’s never been to a huge festival like this and seen this side of the show and I’d like her to see Rob Zombie’s show because it’s insane.

Amy: Yeah we just saw him at Rock on the Range and he blew it away.

Wednesday: Oh it’s went up a notch since then, it’s ridiculous, his show is amazing. Every night I do press and then I go and try to catch a few bands like Lamb of God and then I’m always either right behind Joey when he’s playing or front of house watching every night. It’s cool because I’ve been a fan of Zombie for years, even back to White Zombie, and it’s cool to see my friend and band mate up there rocking those songs out too. It’s such a killer show.

Amy: I remember being in the pit at a Zombie show in like 1994 and got hurt pretty bad, but it was a good night. It’s burned on my brain.

Amy: Where are you living now?

Wednesday: I am living in Los Angeles for the moment, until we go on tour and then I’ll be living on a bus. That’s my plan I’m going to live on a bus and then decide where I want to live when we get off tour.

Amy: You can check it all out, it’s like the best free trip to ride around and pick out a place. And I know you tour with Alice Cooper. That’s got to be like legendary in a lot of ways. What was that like? Any crazy stories from that?

Wednesday: I’ve became really good friends with Alice over the years. The first time playing with him was when I finally got to open up for him with Wednesday 13 back in 2005 and then I have played with him every year almost since then. I just became really close with their unit and his crew. Still to this day, he is the greatest performer, one of the best shows, and one of the most down-to-earth guys. I have learned so much from him and he has given me so much advice and he has helped me out through some dark times, so he has been a really good guy for me.

Amy: So are you guys going to go on tour in the fall? Got something planned yet?

Wednesday: It’s possible. I think that would be a no brainer for Murderdolls and Cooper to team up. Joey is committed to these tours, but Murderdolls comes out the 31st, and we will be touring for two years on that.

Amy: Well hopefully we can catch a show when you come back through here.

Amy: So it’s confirmed? You’re going to be out and about.

Wednesday: Yes, and I can’t tell you who it’s with. But it will be the best Halloween show, ever.

Amy: Okay, we’ll write it down. Make a note.

Amy: You started writing an autobiography too, didn’t you?

Wednesday: No no no I will write that on my death bed. It’s called, “I’m Sorry,” and it comes out the day I die.

Ryan: I wanted to ask you about your accident. You don’t play guitar anymore live, do you?

Wednesday: Yeah yeah, I just couldn’t play it for a couple months cause when I flipped my car in 2007, I broke my collar bone and fractured my ankle and I went on tour three weeks later, and so during the day I was wearing a sling and I was still driving our van, which was probably not the best thing while being on a lot of medication, but no I’m healed up from it. I still have a big knot on my chest from it, but it doesn’t bother me when I play guitar or anything like that. I had to take four or five months off because it took that long to heal because every night I was on tour and I wasn’t resting it.

Wednesday: No. I’m pretty up front about everything I do. I mean I like to watch the show, Friends, people wouldn’t expect that, but I don’t feel guilty about it.

Wednesday: No, no. I’m honest. Everything I listen to, I don’t like rap music, but I like the ghetto boys. They are so mean and angry. Talking about bitches all the time.

Amy: Do you have any up and coming indie bands that your listening to that you just love?

Wednesday: Not anything new. I mean it’s new to me, but its old to other people. I have become a huge fan over the past year of Killing Joke and bands like that that Joey turned me onto. When Murderdolls came out, I was just this close-minded little prick that only listened to glam rock and punk rock and I was like, everything else sucks I hate everything, and then, 8 years later, I am a huge Slayer fan. I listen to everything, you know? So, I opened my mind up a little bit, and even country bands and all that is in between.

Wednesday: But I have opened my mind up to all that kind of stuff even doing the outlaw country stuff, and listening to the other side of extreme heavy metal, and somehow I’ve melded it in my head, which comes off as an influence in Murderdolls, maybe some people won’t see it immediately.

Wednesday: No no, just a little accent. I am from where I am from.